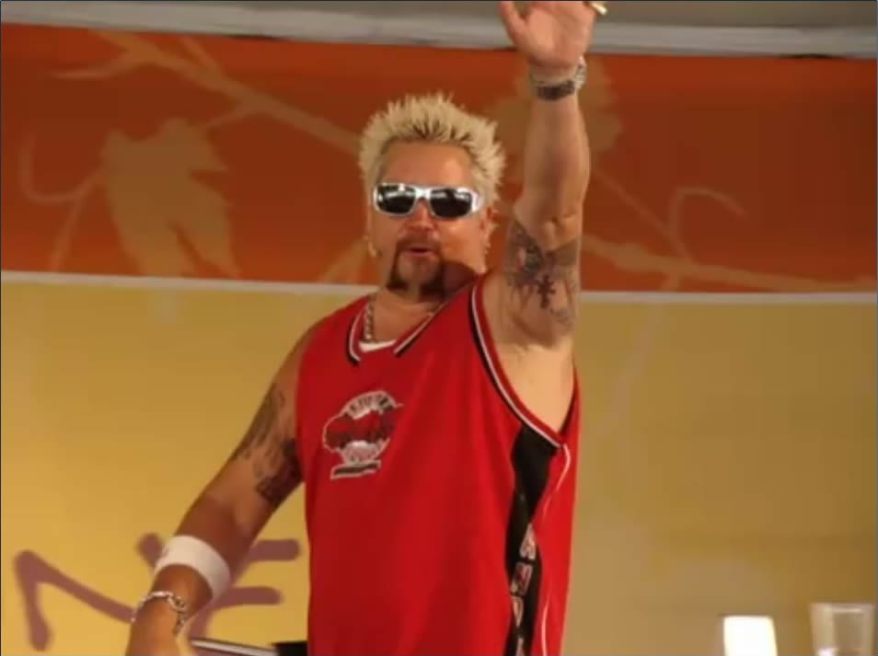 Fieri absolutely destroying life and owning who he wants to be

There are two TV shows that I will watch no matter when they are on TV, and I can typically rely on one of them to be on at all times,  those shows are Diners, Drive-Ins and Dives and Family Feud.

I have reached out to both Guy Fieri and Steve Harvey to be my life coach, but alas, I have not received a response from either.

Anyway, you can imagine my disdain for anyone who takes shots at one of my potential life coaches. Recently Anthony Bourdain hopped off of his private jet and threw on some Toms to smear Guy Fieri once again and I’ve simply had enough. How can we live in a culture that is so anti-bullying yet still accept Bourdain as a mainstay on our televisions sets?

Bourdain’s most recent snail-breathed insult to Fieri came in September when he told People Magazine, “The day you can’t tell jokes about Guy Fieri, comedy as we know it is dead. I tell jokes about those guys; it’s what I do.”

I have so many problems with this as a member of #TeamGuy and a human being in general. (Bourdain has been going HAM on Fieri for a while now, here’s a link to other examples)

First of all, no Anthony, telling jokes about those guys is not what you do. What you do is travel to countries where you need a translator to eat Aardvark genitals. You’re not a comedian, you drink $6,000 bottles of wine and act like you can tell the difference between those bottles and Franzia.

After suffering for months, hiding under my sheets, feeling ashamed to show my face while I wait for Guy to fire back like Meek Mill fans (which I also am) have been waiting for Meek to hit Drake back, my prayers have been answered.

Fieri finally addressed the Bourdain beef in an interview with GQ and his response was immaculate.

“I don’t like him making fun of people, and I don’t like him talking sh*t. And he’s never talked sh*t to my face. I know he’s definitely gotta have issues, ’cos the average person doesn’t behave that way,” Fieri said. “It’s not that I’m not open to the reality that the food world was like this from a few people’s perspective. It’s just, What are you doing? What is your instigation? You have nothing else to f***ing worry about than if I have bleached hair or not? I mean, f***.”

It turns out that my years of waiting for my potential life coach to clap back have paid off. That response was so perfect I almost passed out mid-read. There’s a reason Bourdain hasn’t talked sh*t to Guy’s face and we all know it. Fieri would easily demolish Bourdain in a fight and it wouldn’t be close. It’s impossible to logically argue otherwise.

I feel like Lady Gaga’s freak flag people would love Guy’s response. This response should be what we turn to in times of judgmental controversy.

Bourdain’s whole image that he tries to put off is so much faker than Fieri’s that it’s hilarious. Bourdain tries so hard to be a man of the world that his leathery skin is trying to propel itself off of his own body. At least Guy does what he wants and wears his passions on his sleeve (both literally and figuratively.)

Has Bourdain had Martin Sheen, Kid Rock and Matthew McConaughey make guest appearances on his show? Didn’t think so. Bourdain is so secretly jealous of Guy.

If you’ve been dealing with a hoity-toity bully in your life, pull a Fieri and serve him with a  sweltering comeback.

Guy’s response is exactly why I’ve been trying to hire him as my life coach ever since I became a legal adult. I love it, absolutely adore it. I might get it tatted on my back.

If you’re in a rut, follow Guy’s lead and get that bleached hair look you’ve been secretly wanting for years. Wear a sweatband for no apparent reason. Throw chrome rims on a ’67 Camaro and destroy the streets. But most of all, don’t wear tight v-necks, bully people and travel to Venice just to take a silly-straw to the Grand Canal and act like it tastes good.