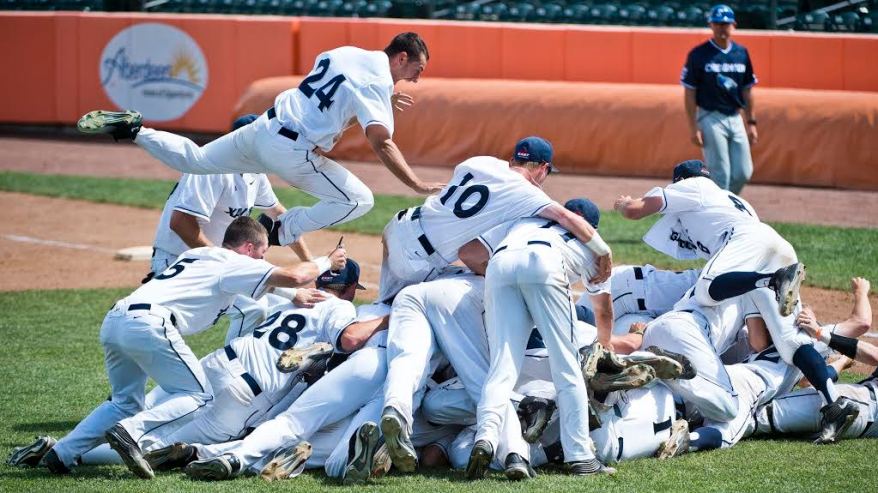 Top ranked Xavier Baseball secured its spot in the NCAA Tournament Sunday with an 8-7 nail biter over second ranked Creighton in the Big East Tournament finals.

Check out some of the Muskies highlights from the Big East Title game right here:

The team won its second Big East Tournament title in two years, while also winning the Big East regular season.  The future is bright with opportunity, but the road to get to this point was anything but.  The Musketeers started off the season 3-11 before rallying behind strong coaching and senior play to end the season 30-28 as Big East Champs, which included winning 16 of the last 18.

That’s HOT. RED HOT. Or is it BLUE HOT?? Because isn’t blue fire hotter than red fire, and the Muskies are blue so I should say Blue Hot right? I don’t know I’m not a chemist, but you get the point, the Muskies are playing some great ball, getting dirty and I assume are having some fun out there.

This team is defined by my favorite word, GRIT.  We talk about it a lot in sports, you need the intangibles to get far, you need the will and desire to go that extra mile, you need to bring your lunch pail to work every day or you just don’t show up. Xavier scratched and clawed their way to this point by sheer grit, leadership, and a whole lot of talent.

This team ran the table in the Big East as the season went on, boasting several Big East All Tournament team players:  Pitcher Garrett Schilling, Infielders Joe Gellenbeck and Unanimous Big East POY Andre Jernigan, Outfielder Matt Fallon and Catcher Dan Rizzie, (we will hear from Dan later in this article) who was also the Jack Kaiser Most Outstanding Player of the tournament. Rizzie batted .571 (8-14) throughout the tourney and no this wasn’t beer league softball, so that .571 BA is even more impressive after some of you just realized that D1 baseball is indeed NOT beer league softball.

The Muskies are headed to Nashville on Friday the 3rd to play Vanderbilt in the first round of the double-elimination NCAA tournament.  Which got the team excited, time for some good ol fashioned blue-hot revenge.

The Musketeers are no strangers to Vanderbilt who swept Xavier in a 3 game series back in March.  That makes this all the better; the match-up will truly be one for the books.  Vanderbilt, a top-10 team nationally boasts a 43-17 record with a very strong team.  The Muskies know the task at hand is going to be a tough mountain to climb, but being afraid to step up to that plate isn’t an option for this team.  Playing their best baseball at the best time and in all honesty being a different team, means the playing field is as wide open as an empty baseball diamond (lol get it).  The point being is that X will not go silently.

I was able to get into touch with the Big East Tournament’s Most Outstanding Player, XU Catcher Dan Rizzie, and ask him a few questions as he delves into the mindset of this team a bit more:

Dan is from Oakland Park, Illinois, a little suburb of Chicago. He just graduated with a degree in finanace. Although he’s from Chicago, he’s a St. Louis Cardinals fan, but we won’t hold it against him.

That last hit gives Dan Rizzie a career-high with this 5-for-5 performance. Can you say MOP? #LetsGoX

ON TO THE INTERVIEW!!

Gunny: I see you guys play Vanderbilt, who is obviously a great team and beat you guys in a series earlier this year but as many baseball fans know it’s not always about the most talented team, it’s about the team playing their best ball at the right time.  And you guys have won 16 of the last 18. Is being a hard-nosed team that didn’t pack it in when it seemed easiest what has gotten you guys here?  After the 3-11 start what turned it around, was it something your coaches or the seniors said or was it just that things finally started clicking?

Dan:  Yeah I think we are just really excited to get back out to Nashville and compete.  Like you said we are hot right now and we are a completely different team then we were in March, I’m so excited to see how we stack up against Vanderbilt now.

G: Buying in to what the seniors and coaches are trying to accomplish is the most important part in my opinion, and it’s clearly worked well… You’ve personally had a great, very impressive season, what was the goal for you personally for this season before it started?

D:  Our goal was to win the league and win the tournament and go to a regional.  So now we are just looking to stir things up in the regional.

G: Big East regular season champs, tourney champs, heading to the big show looking to get some revenge on a top 10 Vanderbilt, that would be one hell of a way to go out, can’t imagine how jacked up you guys are to get down there.  When is the game so everyone is sure to tune in?

D: Yeah we’ve had a great year so far, didn’t want a repeat of last year.  That would be another very special moment for me this season.  We play Friday Night at 8 in Nashville.

G: Okay lightning round now and some of this probably has nothing to do with baseball:  Favorite kind of music? And favorite artist?

D: I like hip hop/rap and reggae.  Favorite artist is probably 50 Cent and the Red Hot Chili Peppers

Flea is definitely the catcher of RHCP. So much grit.

D: It’s good so far, haven’t really listened to the whole thing yet.

G: Does it suck that the basketball guys get more attention than the baseball guys? Also are you really glad there isn’t a football team to really take all of the attention away? You don’t have to answer those, but you do have to.

D: I don’t mind haha.  They are really good so it’s a lot of fun to follow.

G: Johnny Bench or Johnny Manziel? Meaning are you more of a classic kind of athlete, hard nosed and gritty or are you more worried about swag?

D: I would have to say Johnny Bench although I did enjoy watching Manziel play… but I’d have to say I’m more of a classic type of player

G:  If someone bat flips in your guys face do you give your pitch the signal for some high inside cheese next time he’s up? A little chin music?

D: I don’t mind a good bat flip just as long as it isn’t over the top.

G: Final question: If you hit a walk off home run against Vanderbilt are you bat flipping to the moon?

D: Haha we will have to see about that.

G: Haha that would be viral city, just saying.  Thank you though seriously for taking the time, good luck to you and the Muskies we’re all pulling for you guys!

D: Haha not a problem at all man, thank you!

So there you have it.. Dan Rizzie, just like the rest of us, but oh, he also likes to hit baseballs to Jupiter and win big time ball games.  A Manziel concealed and a Bench in the field.  Getting those gritty W’s the old-fashioned way, while having a little fun doing it. Follow the man on twitter @drizz777.  Dan Rizzie is now a longtime friend of The PUP List, even if he is a Cardinals fan, but I did say we wouldn’t hold that against him.

So throw up your X’s and be sure to catch Xavier take on Vanderbilt Friday Night at 8pm.

Follow @XavierBASE for play by plays during the game.