This is How The Cavs Can Beat The Warriors 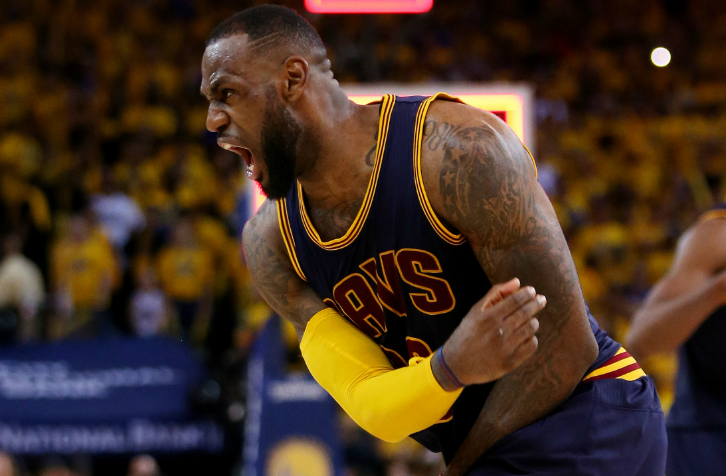 Not pictured: Draymond Green ice-cold knocked out on the floor after LeBron threw this haymaker

Here’s how the Cavs can beat the Warriors:

End of story, thanks for reading.

Just kidding, but seriously, I have the weirdest gut feeling that LeBron is going to cement himself in the best player of all-time argument by taking this series over and winning a ring for Cleveland. I also think it’s just kind of in the cards, I jokingly wrote about the NBA being fixed here the other day, but I’m actually starting to believe it. Wouldn’t be surprised at all if the Cavs benefit from some crazy ass calls, I bet my boy Silver promised LeBron a ring if he came back, the story is too perfect.

I still can’t believe the Cavs have gotten four number one picks since 2003. That’s pretty wild. The most recent one where they took Wiggins felt like the NBA made it happen on purpose so LeBron would come back. There’s simply no way the Cavs could’ve gotten Love without the Wiggins pick, and LeBron was definitely planning it before the draft “lottery” even happened.

Anyway, let me hop off that conspiracy merry-go-round. I’m just going to say it, the Cavs would’ve won last year with a healthy squad and they will win this year. Cleveland took Golden State to six games without Kyrie and Love. Add them both into the picture and that’s a ring.

I joke about Delly, but I genuinely believe that you need a player like him to win a ring. Just ask LeBron, J.J. Barea came out of nowhere in 2011 and murdered the Heat with his unbelievably scrappy play.

Every championship squad needs a guy like Barea or Delly, but here’s the kicker: that guy can’t actually be a great player. So, as a result, Draymond can’t be that guy for Golden State even though he tries to be. Here’s why: when a player that is previously largely acknowledged as “trash” starts taking you to the rack and hustling 175% on defense, you get rattled, you get disoriented, you get f*cked. Players like Barea and Delly are like living, breathing stun grenades. Sorry Draymond, your act doesn’t work. We all know you’re not actually a bad-ass. Draymond took the red pill while Barea and Delly chose blue.

I know this is the hottest NBA Finals take ever but in order for the Cavs to win, two things need to happen. Well, more than two things, but there are two things that scare me. Two things that I’m not positive will happen.

J.R. has to be sniping from three-point land for 4 games…no more, no less

Cleveland needs J.R. Smith to be a knockdown shooter for four out of the seven games against the Warriors. In a perfect world, two of those games would be the first two games of The Finals. The Warriors are sooo damn good at shooting, but so are Kyrie, Love and Frye. J.R. is the X-Factor here because he’s so streaky. I’ve always thought the Cavs are unbeatable when he’s feeling it from beyond the arc. If he can shoot well for four games, Cleveland gets a ring. Cleveland needs that extra sniper to answer Golden State.

The video above is proof that it’s possible. Honestly, I wouldn’t be opposed to a crunch time lineup of Kyrie, Delly, LeBron, Love and Tristan with Delly’s sole responsibility being sticking to Steph like white on rice. That sounds like a winning strategy. I think having Kyrie and Love healthy will allow Delly to truly not worry about scoring and just play amazing defense.

Basically, what I’m trying to say is that I fully trust LeBron, Kyrie and Love to play very, very well. It comes down to if players like Delly and J.R. can come up clutch and, spoiler alert, I think they can. We saw the Warriors are human in the Western Conference Finals, and if Steven Adams can rattle Draymond, so can Delly. Let’s go.