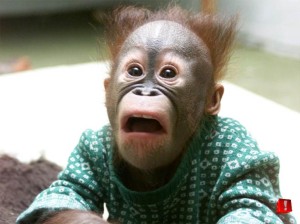 Not actually the monkey who did it, but still…sweet monkey.

NPR — A small monkey brought Kenya’s electrical infrastructure to its knees for more than three hours on Tuesday with a nationwide blackout.

The monkey survived the ordeal and has been turned over to the Kenyan Wildlife Service, KenGen said.

Gitaru is the “largest hydropower station in East Africa,” according to Business Daily Africa.

In its statement, KenGen called the monkey business an “isolated incident.” It added that its power installations “are secured by electric fencing which keeps away marauding wild animals.” Now, the company says it is “looking at ways of further enhancing security at all our power plants.”

The offending primate appeared to be a vervet monkey in a photo published on KenGen’s Facebook page. If it is indeed a vervet monkey, as The Washington Post notes, “it would not be the first of its species accused of wreaking havoc in the country.”

A 2007 BBC article (with the headline “Monkey misery for Kenyan women villagers”) describes a pack of nearly 300 vervet monkeys descending on the village of Nachu, destroying crops and making “sexually explicit gestures” at local women.

This is why I thank my lucky stars I was born in the USA. Everyone is huffing and puffing over our current presidential nominees, but let’s just take a step back and be thankful that we don’t have national power outages because of wild animals. I’d take Donald Trump or Hillary Clinton for president over wild monkeys fucking up my Wi-Fi connection any day of the week.

Just when you think Africa is off and running and stepping their third world game up, they take a few steps backwards. One second you think you’re on the road to economic growth, the next your entire nation doesn’t have power because a monkey blew up a transformer in your largest power plant. Life comes at you fast in Africa; literally, there are cheetahs and gazelles roaming the streets.

These aren’t just innocent, clueless, run-of-the-mill monkeys either. The report above shows that these monkeys like to run around in packs and make “sexually explicit gestures” at women. Monkeys are straight up running around the countryside peddling their dicks for no reason. It’s like Planet of the Apes if all of the primates were on crack.

This puts a lot of stuff in perspective for me. Next time I’m worried about minuscule issues in my life, I’m gonna remember shit like this is happening every day in Africa. I’d put the over/under of me dying in Africa at about 12 hours, and I’d take the under every time.