Gilbert Arenas has been all over the news for practically the last 6 months for saying one dumb thing after another. Basically, my dream scenario/life. From smashing a Mercedes car window with a cinder block for his ex taking him off her Netflix account to absolutely trashing the WNBA, Gilbert Arenas deserves some recognition as the king of hot takes/power moves, right next to Curt Schilling.

Outside of the Cavs, Warriors, Spurs, and the Thunder, I really don’t know shit about the NBA. It’s hard for me to care about players on the Brooklyn Nets, just can’t do it. While I don’t agree with 95% of the shit Gilbert says, I can’t deny him this; a lot of the takes above on the D-Rose trade I feel are spot on. Saying “this is like tipping a crackhead outside the club for waving you over to the free parking space,” is HIGHLY accurate. It’s like the bathroom attendant who waits for tips when you’re in the bar bathroom. Those guys do practically nothing, but I still tip them $2 sometimes just to get a ¢5 mint. The Knicks had to give almost nothing away to get a premier player in the league.

Somehow, in about roughly 200 words, Gilbert seems to roast everyone, including Caitlyn Jenner’s balls, Roy Hibbert saying “owwy”, and DeAngelo Russell for being DeAngelo Russell. Nobody is safe. Nothing is off limits.

When I saw the D-Rose trade yesterday, I had to actually Google who the hell Robin Lopez was just to see what team he played for. I genuinely feel like the Knicks traded Chicago empty candy wrappers and the Knicks got the actual candy bar with D-Rose (if he can stay healthy). I’m a little worried that having Melo and D-Rose on the same team may cause a serious rift though. While it’s not exactly on par with a KD-Westbrook situation, I think it’ll be similar.

No matter what though, I can at least take solace in the fact that Gilbert Arenas will keep firing off #nofilter Instagram posts at the speed of light. 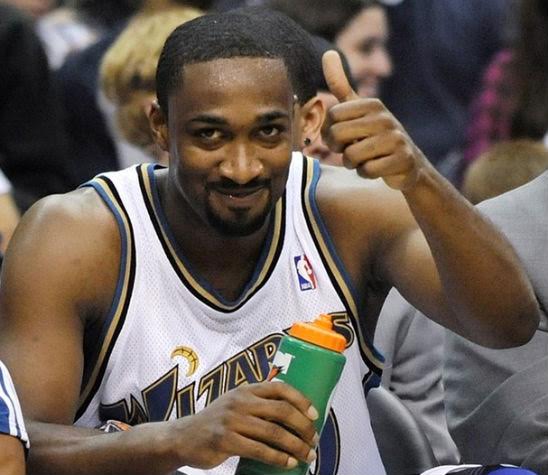