Last night Joey Votto was trying to catch a foul ball in the stands and a fan got in his way. He got upset and grabbed the Reds logo on the fans shirt as if to say, “Really man? You’re a Reds fan, let me make a play.” Watch below.

Bad boy #JoeyVotto is cool as hell! After making fun of a rich kid last week, he grabbed this #Reds fan's jersey like "really man?" when he caused him to miss a foul ball. #mlb #Cincinnati

He later apologized and made good with the fan. Not a big deal at all in the grand scheme of things, in the end it’s just another funny video to watch.

However, I can’t help but think Votto is becoming more and more frustrated with playing in Cincinnati. Yes, I know he’s getting paid a ton of money, but I don’t think he’s the type of guy that can stay happy just because he’s rich. The team dealt Jay Bruce and there’s really no bright future in sight. The Reds have been playing well lately, but they do this every year when they’re so far out of contention because there’s no pressure on the team at all.

Just last week Votto made fun of a little kid sitting behind home plate. The kid was clearly rich and he asked for Joey’s batting gloves (a pretty aggressive request to be honest), and Votto’s response was hilarious.

Kid asks for Joey's batting gloves. Votto replies "You're sitting in the front row, you're elite. This isn't a 'Make A Wish' situation"… 😂

To be completely honest, I LOVE Bad Boy Joey Votto. It’s nice to see that he’s actually pissed off about how shitty the Reds really are. Here’s another gem where he fake throws a foul ball to the crowd.

"This isn't Make-A-Wish" — Joey Votto makes yet another enemy out of an innocent fan https://t.co/LfRVco3j6l pic.twitter.com/YzJ9xiUEyl

This is a slippery slope though, and I wouldn’t doubt if Votto gets real weird here coming up. It reminds me of what happened the last time Cincinnati had a truly great athlete that ownership fucked over: Corey Dillon.

Here in Cincy we have a strong tendency to fall under the “you don’t know what you’ve got, ’til it’s gone” sports fandom mindset. It happened with Dillon, Palmer, Ochocinco and probably some others I’m forgetting. Our sports owners never risk anything and they disrespect great athletes. The Bengals SUCKED during Dillon’s prime and he was very obviously pissed, but who can blame him? I can’t imagine having Mike Brown for a boss. I can’t find it online, but I remember Deion Sanders telling a story on the radio about how much he loved Cincinnati while he was playing for the Reds. 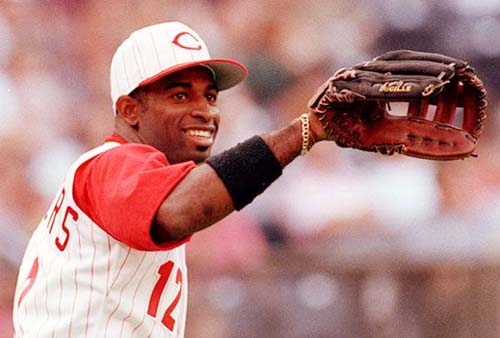 Sanders said he told Mike Brown that he would love to play for the Bengals, but Brown didn’t even think about paying him what he deserved. Classic. Why try to sign one of the most legendary athletes of all-time? It’s not like it would have been historically awesome to have Neon Deion playing professionally on both of our teams. Good call, Mike.

I also remember Sanders saying that one time at an NFL meeting in Indianapolis, every other NFL management group came in limos and nice cars, but Brown and the Bengals whipped a Ford Taurus from Cincy and they were all piled in like sardines. You simply can’t contend in pro sports being cheap, you really can’t. Hey Brown and Castellini, read up on your classical Roman playwrights for me one time.

It might seem random to bring Mike Brown into this, and I’ll admit that I hate him, but as Cincinnati fans we need to stop being content with our mediocre ceilings. Does anyone actually think the Bengals can win the Super Bowl? Does anyone envision the Reds even sniffing a World Series in the next decade? You’d have to be sniffing bath salts to think the Reds can even sniff being great at baseball anytime soon. Look at our division right now.

The problem with professional sports in Cincinnati is 100% ownership related. Right now it doesn’t seem like Castellini has any vision for the Reds’ future. I’m pretty sure the Reds are owned by like 18 different people (the most recent article I could find is from 2013). That’s an extremely inefficient way to run an organization. As fans, we tend to forget that this is just a business to the owners. So, as long as we keep buying tickets and clothes, the owners are happy. If we hooked all the Reds’ owners up to a lie detector, I think we’d find out that they don’t even care that we suck.

We need to start appreciating Votto more and ownership has to actually attempt to make some bold moves and get a decent team going. I’m not a huge baseball guy, and I know there are a million reasons why we’ve lost the majority of our good players, but just look at the list of players the Reds have recently lost off the top of my head: Edwin Encarnacion, Josh Hamilton, Edinson Volquez, Johhny Cueto, Mat Latos, Aroldis Chapman and Jay Bruce.

CINCINNATI – The Reds‘ trade of popular slugger Jay Bruce was not going over well in the clubhouse the day after.

“I think I see the plan,” veteran pitcher Homer Bailey told ESPN.com. “They talked about us losing 100 games at the beginning of the year, and s—, we’re damn sure trying, aren’t we?”

Both Bailey and veteran first baseman Joey Votto made some critical comments about the trade to Cincinnati TV stations on Tuesday, the day after the non-waiver trade deadline. The Reds traded Bruce, who leads the National League with 80 RBIs, to the New York Mets for 22-year-old second baseman Dilson Herrera and 19-year-old pitcher Max Wotell.

Bailey said that unless Herrera turns out to be as good as Seattle Mariners star Robinson Cano, “The Mets got the better of us on that one.”

Bailey said it was a blow inside the clubhouse because the Reds were playing better, having gone 9-3 in the days leading up to the deadline. He said the team was beginning to feel like it was building momentum toward the 2017 season, similar to the way it generated momentum before a division title in 2010. The Reds were 20 games under .500 going into Tuesday’s game against the St. Louis Cardinals.

“I think it’s kind of like you see the balloon getting bigger, and then, all of a sudden, you poke a hole in it,” Bailey said. “Apparently, they know a lot more than we do.”

I hate to just paste a bunch of text from another article, but I can’t say it any better than that. Homer hit the nail on the head there, he’s pissed and Votto is pissed too. It’s time for Reds fans to stop being so passive and actually let ownership know how bad they are at their jobs.

I’d like to think they’ll figure it out before it gets ugly like it did with Dillon, Palmer and Chad…but judging by Votto’s recent outbursts and Homer’s comments, it seems like we’re already there.

p.s – This is the problem with us as fans, the media people we listen to buy into the Bengals and Reds PR bullshit waaaaaay too much. Be better, Mo.

Mo has 42.7 K followers and that shit has four retweets…FOUR!!! Have less of a pulse on the city, bro. He got absolutely worked by Brown’s comments.