College Football Week One Preview: It’s the Rowdiest Week One in a While

What’s that you whispered in my ear?  College football is returning?!?!  Then so am I, dangum-it.  We have some picks and some games and some other stuff, but usually this should be a little more in-depth.  I’m warming up and just in time for football season.  Let’s look back at our week 1 highlights from last season.

BACK TO LIVE ACTION!….OR…Well….FUTURE ACTION!

The Game You Obviously Will Watch:

The little numbers next to some big names give away how incredible this game could be; however, the side stories might make this even more interesting than the paper tells us.  Florida State looks primed to start a freshman Quarterback Deondre Francois against one of our SEX-iest defenses in the country.  The defense refers to itself as “Landsharks” and I know that, as a former grade school backup Quarterback, I would fear throwing or, god forbid, scrambling against sharks who have evolved thoroughly enough to live on land and have thumbs.  I was sufficiently terrified of sharks when they were simply jet-propelled, organic tooth factories where if you maintained a “stay the fuck away from water” stance you were safe; however, now there are sharks on land and even Dalvin Cook must be needing some new jockeys considering this news.  Either way, Florida State will face a much loaded box and if Francois soars out of the gates in Jameis-fashion then it might turn into a little blowout for the Noles, but Ole Miss has had luck against its big boys on the schedule of late.  It’ll need some Alabama in 2015 style turnovers from Francois to give them a chance with Cook running around a newly refurbished front 7.

The Game You Obviously Should Watch:

Houston defeated Florida State in the Peach Bowl last season.  I know many of you had forgotten after deciding to purge 2015 from the memory immediately following Ohio State’s loss to Michigan State, but later in the season, Houston met up with the vaunted Seminoles as 15 point underdoges and wiped the floor with the FSU defense.  It gives me pause with Florida State at #4 this season, but that is for another time.  Houston could set itself up for a run at a playoff spot (I know, an AMERICA CONFERENCE TEAM?!?) with a win against Oklahoma (a suspected playoff team from the Big 12).  AND a win is not out of the question with the return of Greg Ward and Tom Herman.  Houston will have a de facto home game and a city rallying behind the future Big 12 hopeful.  Expect fireworks.

The Game You Obviously Won’t Watch, but Should:

First off, I know that Ohio State is my alma mater, but that goes against what I’m about to type….**Exhale**…I’m worried about this game.  Bowling Green is not your mother’s MAC Conference team…hell, the Falcons aren’t even the usual MAC team from our generation.  This is the team which nearly knocked off Rocky Top in Knoxville one season ago AND will have all the motivation of trying to become the first team from Ohio to beat the Buckeyes in nine decades.  The Buckeyes should steamroll and I have every fiber of my being hoping they do, but I also once had every fiber of my soul praying I’d never come face-to-face with landsharks, but that appears inevitable as I prep for a very bloody and hostile cartilaginous rebellion.  The Buckeyes always play awfully in the first week of the season, so keep an eye on the scoreline while watching some other very hyped noon games. 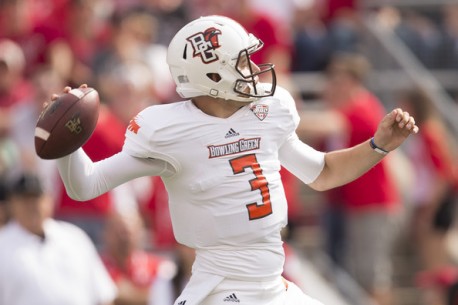 DISCLAIMER: THESE ARE PICKS FOR TEAMS TO BE UPSET.  I’M NOT SAYING THERE’S A CHANCE….I’M TELLING YOU THAT THESE TEAMS ARE GOING TO LOSE

I already talked much about this game, but the Sooner underwhelmed me much against Clemson in the playoff.  It seems every year they have a disappointing loss early in the season, so why not Week 1?  Houston is deadly and very underdoge in this game…a game many are forgetting as a tough one for the Sooners.  People point to Texas, Ohio State, TCU, and Baylor; however, this is all but a road game against a team talented enough to beat Florida State (with Everett Golson) on season ago.

Each season we seem to hype it as Kentucky’s year to make noise in the SEX-iest Eastern Division (but not really).  There has been a lack of hype despite the East being one of the lackluster divisions in college football for a couple of years.  Kentucky plays a team with a high-powered offense which will score points.

Picks Against the Spread:

Alabama went 2-2 against the spread on neutral fields last season beating out Wisconsin in the opener and Michigan State in the disaster known as the 2015 Cotton Bowl.  Bama will usher in ANOTHER new Quarterback and its getting old expecting the lack of QB experience to bite Buhmuh in the tush, but Southern Cal is going to experience the same issue.  It’ll be a trenches type game and, when pushing comes to shoving, take Buhmuh in such a contest: Alabama 28 – USC 14

The Tigers are the runaway favorites from most of the country to win this season’s national title; therefore, I have no doubt they make this a close game against an Auburn team with some aspirations to play in the playoffs.  Clemson will be surprised at the physical defense Auburn brings to the table and Watson will have to find a way to make plays for Clemson to narrowily come away with a win that opens the team’s eyes: Clemson 34 – Auburn 28

I subtly led you astray and have to admit that I feel Ole Miss has lost so much defense from last season they will not be able to contain Dalvin Cook enough to force the pressure on a freshman QB.  This game is a swing game, but a four point spread is not enough for me to think Chad Kelly overcomes a talented FSU defense AND the points his defense surrenders to the Noles: Florida State 34 – Ole Miss 27

If this game was played aboutthree months later, I might think a little differently, but the catch is that Louisiana State is not your typical southern team.  The Tigers are expected to run the ball quite often with Fournette and Wisconsin lacks the speed and talent of an Ohio State or Michigan to stop them from doing so: Louisiana State 40 – Wisconsin 17

There was a time when picking Ohio State against the spread at home was a very fruitful decision…wait, that was last season.  The Bucks finished only 2-5 at home against the spread last season and went 1-2 against its terrible non-conference opponents in the Shoe.  The trend continues as OSU starts 2016 off slowly before the usual second half domination.  Expect a halftime score of roughly 14-10: Ohio State 38 – Bowling Green 17

I simply admit to the belief that Michigan cannot score much more than 41 points: Michigan 45 – Hawaii 7

I’ve 100% changed my mind from earlier, this is the easiest pick I’ll make all week.  McCaffery runs rabid against a bad K-State team and the Cardinal win by more than thirty: Stanford 41 – Kansas State 10

The Vols were the favorite pick of people across the country last preseason to win the SEX-iest Eastern Division* *(but not really).  This year, they’ll have to open with our favorite upset team of all time, but the Vols are going to do it with attitude after being a national disappointment last year: Tennessee 48 – Appy State 24

god bless whoever made this GIF

I know very little about Washington being ranked fourteenth, but I know very much about Rutgers being awful: Washington 45 – Rutgers 17

Rosen is proven to be above average.  Texas A&M was involved in much scrutiny and drama in the offseason and I fail to think Manziel and Miller are walking onto Kyle Field.  A&M is an off-chance favorite, and I am inclined to take a better team when its the underdoge: UCLA 27 – A&M 24