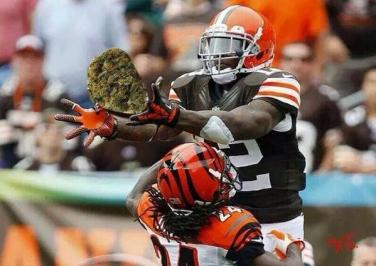 Josh Gordon comes in third when you talk about current NFL dumbasses. Only Johnny Manziel and Justin Blackmon, who you might’ve forgotten about, top Gordon if you were to rank this kind of thing.

Technically, the top-2 are still a part of the NFL, believe it or not. Manziel, a free agent and Blackmon, a Jacksonville Jaguar who is indefinitely suspended and can’t stop getting DUI’s.

I don’t care if you smoke weed at all. I don’t do it, but it’s the 21st century and it’s on its way to universal legalization, so toke up all you want my friends. But, if your employer wants you to stop, you should probably stop.

Gordon is an idiot for not doing just that, but he’s even more of an idiot for this whole paternity test thing. All you gotta do is jack off in a cup, Josh. That’s it! Squeeze out some of your, probably, super-athletic semen and get this sorted out.

So, really, the government is trying to stop him from becoming a geneticist after his football days are over. For all we know, Gordon has cracked every key to the human genome, but the government is afraid to see a tattooed man succeed in such a way. Shame on you, Hillary Rodham Clinton/Donald J. Trump.