The PUP List Investigates: Who Placed That $1.1 Million Bet on The Falcons +3?

Those who aren’t constantly roaming the Internet streets may not be aware of this, but last night news that someone bet $1.1 million on Atlanta +3 went viral. The identity of the bettor remains unknown, but here at The PUP List we pride ourselves on doing #GorillaGuerillaJournalism.

Even though the person who made that bet likely died during overtime last night, we’re still going to do our journalistic duty and figure out who it was, whether the body is warm or not. Here’s an excerpt from NBC News about the bet:

NBC NEWS – A bettor using his phone app put $1.1 million on the Atlanta Falcons plus 3 points in the Super Bowl, part of an influx of money that could make Sunday a record day in Las Vegas sports books.

Sports books around the city said betting was strong leading up to the game, with a good chance the action will top the record $132.5 million wagered on last year’s game between Denver and Carolina.

“I wouldn’t bet against it,” said Jay Kornegay, who runs the sports book at the Westgate Las Vegas. “It will be close, but I think we could easily set another record.”

The unidentified bettor who wagered the $1.1 million was a customer of CG Technology, which operates a string of sports books in the city. The bettor will get $2.1 million back if the Falcons win the game or lose by 1 or 2 points.

The table is set, now it’s time to figure out who this mysterious person was. Let’s trim the fat first:

Why is Mike a suspect? Well, for one, he has serious cheddar. Even though he lost a ton of money after the whole dog fighting ordeal, he did sign a $100 million deal with the Eagles in 2011. We also know he likes to gamble, because, well, he used to gamble on dog fights. He was a huge presence during Super Bowl week in Houston because he just recently announced his retirement. I could see Mike riding out his boys one last time in honor of the retirement ceremony. When you’re hot, you’re hot.

Lil Wayne once said, “real Gs move in silence like lasagna,” and that description perfectly fits Usher. At this point he has money to burn, on top of his own mammoth career, he also discovered Bieber and he owns a part of the Cavs. According to The Richest, he has about $180 million to his name right now. $1.1 mill is truly toilet paper to him and I could see him throwing it on the Falcons just to rep his hometown and make things interesting.

Chipper is probably the most beloved white man Atlanta has ever seen, and it’s an established fact that he likes to gamble. A quick Google search says Chipper is worth $110 million right now, and if you look at the pic above, that’s the smile of a man who’s down to get frisky. Atlanta was very good to him and I wouldn’t be surprised at all to find out Chipper was the mysterious bettor. 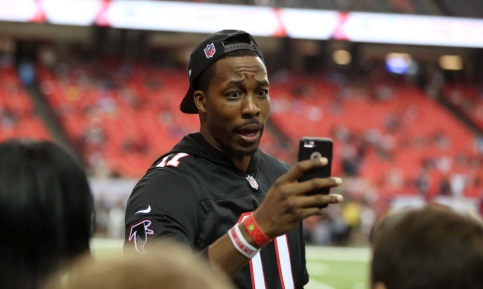 Dwight Howard is a man who flies by the seat of his pants. We’re talking about a dude who owns 50 guns and 20 snakes. He’s back in his hometown of ATL, playing for the Hawks and keeping his nose clean for the first time in a long time. You know he still gets the itch to do some extremely ill-advised stuff every now and then, and betting against the Patriots is exactly that. He’s been known to take some L’s throughout his career, and I could see him being the bettor. He wasn’t going to make it known before the fact, but I think if the Dirty Birds would have hit, he would’ve then claimed it.

This may seem absurd, but hear me out. Last night could have been the best night of Roger’s life. If the Falcons could’ve hung on and whooped that ass, Roger would’ve been able to see Brady cry in person. That alone would have been worth it for him, but Roger strikes me as a guy who likes to double down. If he could’ve handed that trophy to Arthur Blank AND pocketed a quick $2.1 mill, that’s what we like to call a LICK. He also makes $40 mill a year, so 1.1 is pocket change. Leave no stone unturned, sometimes the culprit was right under your nose the whole time.

The phrase “printing money” gets thrown around a lot, but Sam Jack PRINTS MONEY. He’s all over the TV all the time. What’s in his wallet? A shit ton of money. He probably has access to some sort of “Limitless” type of pill too. And, he’s a ride or die Falcons guy. According to a quick Google search, he’s worth about $170 mill. He should have way more than that, which is a good sign that he’s probably a gambler. He even scouted Aaron Rodgers for the Falcons prior to the Packers game. Nobody does that if they’re not sprinkling. 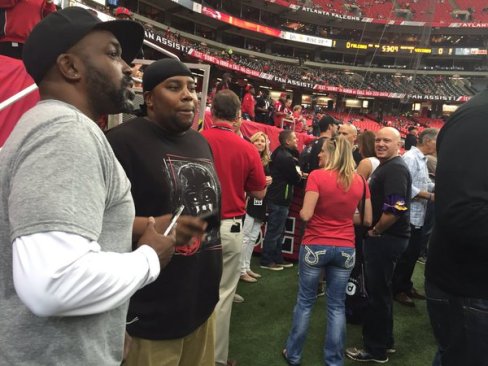 Kenan is a big Falcons guy, and he’s got stacks. Google says he’s worth about $5 million, so that means throwing $1.1 mill on Atlanta would be ballsy as hell, but he seems like a ballsy dude. Just recently he told ESPNW, “For anybody saying that Atlanta fans aren’t loyal, you’re out of your mind. And you’ll see on Sunday what I’m talking about.” Sounds like somebody has a chip on their shoulder, the “you’ll see on Sunday what I’m talking about” is something a gambler says. The classic “put your money where your mouth is” insinuation. Kenan is a sneaky contender. 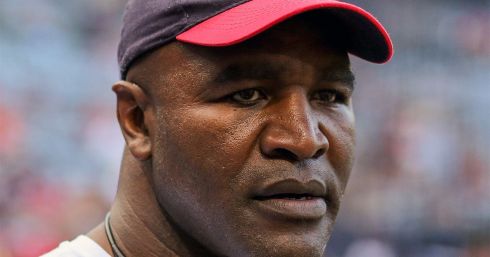 Evander’s seen it all, apparently he’s worth just about $1.1 million right now, so maybe he threw the house on Matty Ice and the boys. He’s an Atlanta guy through and through. Fuck it, at this point why not let the house ride if you’re Evander Holyfield? If you win, that’s a fat payday. If you lose, just hop on the local ad circuit or fight a Grizzly bear on a live webcast sponsored by Monster Energy. If you really think about it, putting over one million dollars on the Falcons +3 would probably rank among the smarter financial decisions Evander has ever made. I mean, it did come close to hitting after all.

So, we’ve narrowed it down to these eight, and any one of them could have thrown that cheese on the Falcons. They all shoot from the hip, and they all have money to burn. But who has the most incriminating evidence stacked against them?

After much deliberation, The PUP List has determined that it was most likely Samuel L. Jackson who bet the $1.1 million on the Falcons +3.

The fact that he only has $170 million means that he blows through cash pretty solidly. Also, he still sells out EXTRA hard for Capital One, and an established acting legend shouldn’t need to do that. Sam Jack is a guy who always needs a steady stream coming in. We’re talking about a guy who has overcome cocaine and heroin usage issues, and the most logical explanation for throwing over $1 million on the Atlanta Falcons to cover against the New England Patriots is being high on heroin with access to a sportsbook on your phone.

Plus, we all know what his wallet looks like anyway, it’s the one that says “bad motherfucker.”

They don’t make em like Ochocinco anymore. Some all time cameos from Bengals WR coach Hue Jackson and Jon Kitna in there.
Would’ve been so rowdy to see Deion Sanders on the Reds. He played for the Reds in ‘94, ‘95, ‘97 and 2000. The video is from 2000. Fun fact: I’ve heard a rumor that Deion loves Cincinnati and wanted to play for the Bengals but Mike Brown didn’t feel like paying him.
Tyler Boyd already talking shit on behalf of Burrow. Ya love to see it.
Dalton to the Cowboys!!! Dak is an unrestricted free agent right now 👀.
Booger arguing that Burrow will be playing with less talent on the Bengals than he had at LSU?? The Bengals, or any NFL team, would sweep the SEC and win a Natty. How is this a real take?
Farewell to the Bengals all time passing TDs leader. Thanks for the good times bre.