Why Children and Techies Love The Warriors: A Psychological Look at Being a Bandwagon Warriors Fan

If you go to a basketball event located anywhere but Cleveland, you will undoubtedly see the majority of children wearing Warriors-related gear. You’ll see kids rocking Steph jerseys, socks with Klay Thompson on them or the even new KD shoes. The facts are that the Warriors have a stranglehold on the youth, but why?

This GIF made by Fanatics.com shows the rise in Warriors merchandise sales since 2014:

As the Warriors got better, their merchandise sales increased. It makes sense, but this type of nationwide NBA fandom really hasn’t happened since MJ’s Bulls. Yes, there were a lot of Heat fans when LeBron, Wade and Bosh teamed up, but the majority of the country united in hatred of Miami. Just what is it about the Warriors that connects with people, especially children and techies, on such a broad level?

I think the most basic element of their rise in popularity can be attributed to the re-branding of their logo. I was actually fond of the Warriors when they pulled off the greatest upset in NBA playoffs history, but now I abhor them.

How many current non-Bay Area Warriors fans even know about that upset? I would guess less than 20%. But, back to my point, look at the difference between these logos:

The Warriors ownership did a great job of re-branding. The new logo is clean, bright and appealing. It has become synonymous with progressive thinking, and the bridge seems to represent a connection to the future of basketball. I feel comfortable saying this because of the now infamous quote Warriors owner Joe Lacob uttered before last year’s eventual loss to Cleveland in The Finals. For those who don’t know about the quote, here is the excerpt from a March 2016 New York Times article:

That is the most pompous basketball-related quote I have ever read, and I’ve been keeping up with all the LaVar Ball stuff. I can’t lie, it makes me feel so good inside knowing that they lost the Finals to a team based in Cleveland, Ohio. I wonder how that smoothie tastes now? That article had this headline: 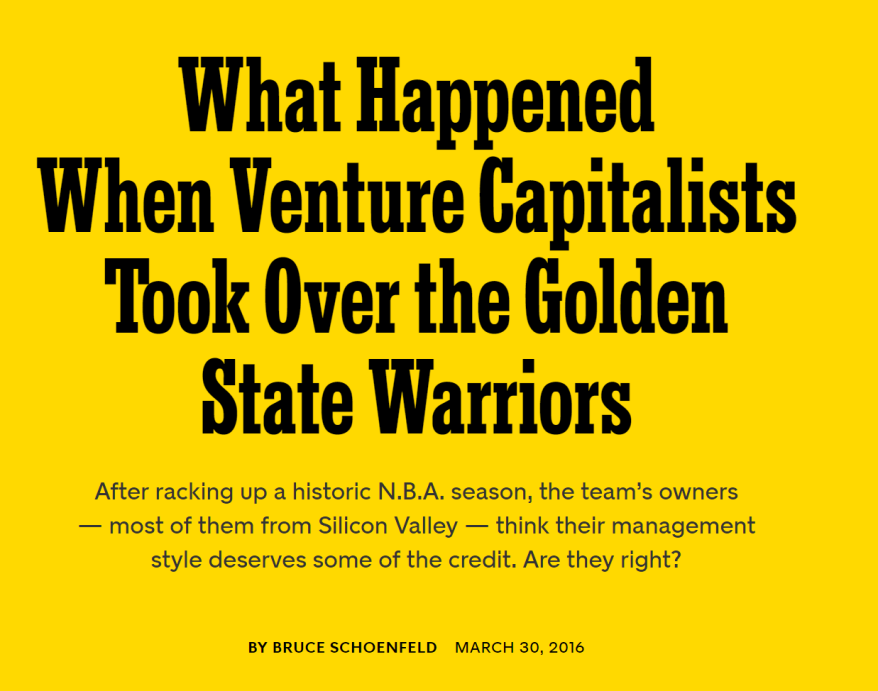 I’d like to say what initially happened was the Warriors got inexplicably lucky in 2015. In 2015, their path to the title looked like this: Pelicans, Grizzlies, Rockets and Cavs. Every single one of those teams suffered an injury to their starting point guard (Jrue Holiday, Mike Conley, Patrick Beverley and Kyrie Irving). Kevin Love was also injured in The Finals. Did they still win a championship? Yes. Was it as impressive as the media makes it out to be? No, it was the greatest stroke of injury luck the NBA has ever seen.

So, to answer the question that the NYT posed, what happened to the Warriors after Venture Capitalists took over the team is exactly what happens to every startup that makes it: they worked hard, but they also got extremely lucky. The liberal media is infatuated with over-hyping the Warriors accomplishments simply because the connection to Silicon Valley is so easy to make. It takes no mental energy to make the connection, the Warriors are playing a revolutionary brand of basketball right next to Silicon Valley, the area where revolutionary technological advancements are occurring. Just look at what happens if you Google search “Warriors Silicon Valley”:

And those results go on for pages and pages. It results in easy pageviews for media outlets and it makes people want to be Warriors fans because people love to feel smart. So, in order to appease the masses that love the Silicon Valley-Warriors comparison, I’ll give you one that actually makes sense:

There is a tech bubble, and its burst is impending. The same can be said for the Warriors.

This Bloomberg article from October entitled “The Tech Bubble Didn’t Burst This Year. Just Wait” could have essentially been written about the Warriors. There are a few elements of the piece that I love, we’ll start with this quote:

How’s that one taste Mr. Lacob? Maybe mix that into one of your smoothies. Yes, you broke the ’96 Bulls regular season wins record, but you lost the Finals. Congrats. You then panicked and added Kevin Durant in hopes of being able to stop the best athlete on the planet, LeBron James, but you didn’t take team chemistry into effect.

Your team is currently operating at full strength without Kevin Durant, they’ve been playing their best basketball of the season while he’s been injured. But, now your new toy is returning and he will inevitably alter the chemistry of your team. The Warriors roster is like a jailbroken iPhone, it has capabilities that surpass all other normal iPhones, but as a result it lacks stability and is more susceptible to viruses.

The Warriors catch phrase is “strength in numbers”, which is hilarious because it’s actually their weakness. According to the statistics, they are strong, maybe unbeatable, but they don’t take team chemistry into account. It’s why they lost last year. Draymond Green lost the series for GSW by losing his cool against LeBron and getting suspended.

Instead of addressing that problem and telling Green that he needs to re-assess his ego in order to win it all against a fully healthy Cleveland team, they went off and added another giant ego: Kevin Durant. In these upcoming playoffs, Draymond will be even more starved for attention and it will cause the Warriors to walk away empty handed once again. 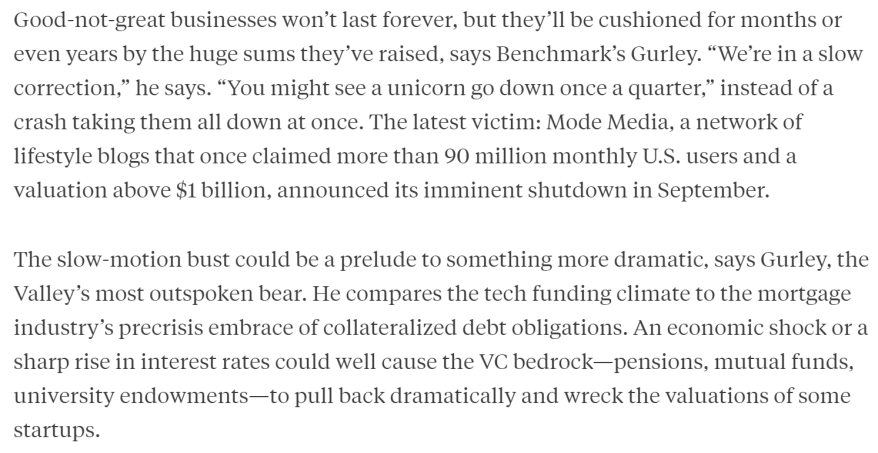 I truly think the Warriors’ Finals loss last year was just the tip of the iceberg. When we look back at the history of the NBA 30 years from now, the demise of the Warriors will be even more interesting than what happened to the Thunder. 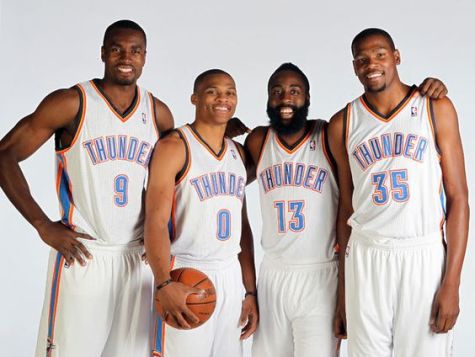 Children love the Warriors because children can easily relate to the Warriors. The Warriors are the most childish team in professional sports. That video recap from The Fumble above highlights all of the immature moves the Warriors made that caused them to lose the Finals last year. Kicking people in the groin, making sly comments and cyber bullying. They angered an actual great player to a point that made him truly unstoppable.

The Warriors remind me of Uber. People act like Uber will take over the world, but no one seems to care that the company lost $1 billion in the first half of 2016. As Social Capital founder Chamath Palihaptiya said in the Bloomberg article, “there are a whole bunch of business that are good, but not great, but they’ve raised money as if they were great.” The Warriors are good, not great, but they act as if they are great. They are not a dynasty, they have one lucky ring. The Spurs are a dynasty and I truly wouldn’t be surprised to see the Spurs defeat the Warriors in the Western Conference Playoffs this year.

When it boils down to it, with the retirements of Kobe and Duncan, there is only one great player in the NBA right now and his name is LeBron. As long as he has a healthy supporting cast, he will not lose a seven game series to the NBA’s startup on the verge of “pivoting”, to use an industry term. The Warriors bubble burst last year, and it will burst again this year, except the explosion will have an even more devastating reverb effect.