I’ll put my hand up and admit that I was completely shocked the Yanks won on Monday. Coming off a sweep of the defending world champs at Wrigley and an 18 inning Sunday night marathon, I was willing to put the house on the Reds Monday night. Not only did they win Monday, but they came out raking right out of the gate, putting up a three spot in the top of the first. The major takeaways from Monday included Gardner staying hot with a couple of hits and another homer, Gary starting to look like the 2016 version of himself and another subpar outing for Tanaka that made every single pitch look like a grind. Winning streak reaches six.

Tuesday was a different story. CC struggled early yet again and has me looking at Girardi wondering when the move to the bullpen is coming. His last three starts:  15.2 IP, 23 H ,18 ER, 8 BB. If this team is serious about making a run, there are two glaring needs: starting pitching depth, and a left hander in the bullpen. Could moving CC to the bullpen and give someone like Chad Green some starts in the rotation solve both of these problems? 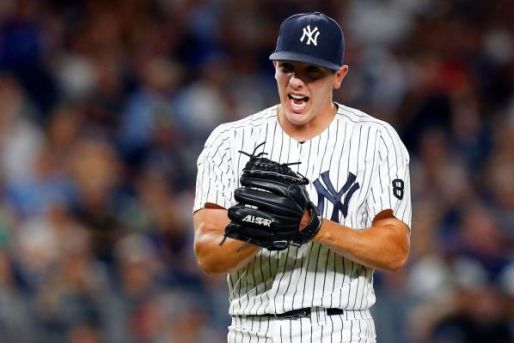 Maybe. Could it create more? Absolutely not. Girardi needs to pull CC from the rotation immediately and see if he can provide some value as a match up lefty and long relief guy. CC rant over, on to a four game match up with arguably the best team in the AL.

Thursday ended up being what the Yankees have come to expect from Dallas Keuchel: dominance. In his last five starts against the Yankees, he is 4-1 allowing only four earned runs while striking out 40 and walking six. In a long list of Yankees killers, Keuchel is climbing, especially for a pitcher not even in the AL East. As far as the game itself, it was relatively uneventful. Pineda continued to be solid, except for a long ball to Correa in the first. Overall, he ended with a line of 6.2 IP , 3 ER, 1 BB, 7K. The only excitement of the game came at the very end with Ellsbury being thrown out at the plate by Jake Marisnick on a Sanchez single for the 27th out.

What a throw🔥😳 Ellsbury thrown out at home to end the game. pic.twitter.com/iMPpiyOCPI

On Friday, yours truly made his way to the Bronx to watch from the bleachers. Unfortunately, absolutely no one on the Yanks offense showed up with me and the Yanks lost 5-1. Jordan Montgomery was uninspiring (6 IP, 4 ER, 1 BB, 7 K), but has been solid since his mid-April call up. Aroldis Chapman left in the 9th with a shoulder injury *see more below.

The first game of Sunday’s double header was a great win for the Yanks, bailing out Severino who just flat out didn’t have it. The offense was highlighted by three homers, one apiece from Castro, Judge (fucking moonshot to dead center) and Gardner. The big hit of the game came in the bottom of the 7th when Headley hit a bases clearing triple (!!) off of one of the most dominant reliever of 2017 in Chris Devenski.

From everything that happened in this game, my major takeaway is that Yulieski Gurriel is by far the fucking worst defensive first baseman in the big leagues. He let a ball through his legs, dropped a pop up and missed an easy pick that should have been his third error of the game.  If the Astros are going to be the best team in the AL, they can’t afford to have this man in the field.

The final game of the series was overshadowed by an incredible ceremony for the GOAT, the captain, #2 Derek Jeter, #2.  For more, here are some tweets from the night:

Tanaka then followed this up by taking a big, fat, wet dump in his pants giving up 8 runs and not getting out of the 2nd. Oh and Matt Holliday hit a three run homer.

I have to give three Jeter fanboy stats to start this section off right.

AROLDIS NEWS:  Chapman was placed on the 10 day DL with left shoulder inflammation.  Yikes.  As of Sunday night he is completely shut down from throwing for 2 weeks, with an original timetable of 4-5 weeks until returning.

Brian Cashman said that the plan is to have Aroldis Chapman rest for a minimum of two weeks. Yanks probably looking at a month without him.

Even after going 2-4 this week, the Yanks still own a .5 game lead in the AL East. Buckle up, looks like there could be important baseball in the Bronx throughout the dog days of the summer.