Despite Their Record, The Reds Made Significant Strides in 2017

162, gone too quick. The Reds season finished up yesterday, and I think we learned a tremendous amount about what the future may entail. I said in my preseason blog that the biggest thing that we would see this year is improvement, and I genuinely believe that we saw that. How can a team that went 68-94 have improvement? Simple. You cannot look at the record. Think big picture.

The Reds needed this year to see some sort of hope out of young pitching, and I believe they found something. Luis Castillo has ace material. Flat out nasty.

89+ innings with a 3 ERA. He’ll be very good. Sal Romano and Robert Stephenson showed great signs in August and September. Amir Garrett had glimpses early in the year. Tyler Mahle had good outings in August. The young pitching is here. Now, that doesn’t mean we can expect to have 5 guys next year roll out with a sub 3 ERAs, but definitely good things to come. Shockingly, Homer Bailey showed good things. Now everyone in Cincinnati hates Homer Bailey because they think they could have paid Johnny Cueto instead, but that wasn’t really an option, people just refuse to see that. Homer had some really solid outings, especially for a guy who was coming off of 2 arm surgeries. I’m not saying he’ll be a Cy Young candidate, but he was quality, and he will help the pitching staff next year. If I’m the Reds, I’m rolling out this starting rotation next year: Bailey, Desclafani (if he ever gets healthy), Castillo, Mahle and Stephenson. Throw Romano, Finnegan and Garrett in the bullpen. You know starters will get injured, you will have those guys to rely on, and if not that is a very good bullpen. Add them to Peralta, Iglesias, and Lorenzon. That’s well improved.

Offensively this year was a huuuuuuggge success, Joey Votto solidified himself as the greatest Red of all time. He is a first ballot hall of famer, and the best pure hitter in the game. A true cornerstone.

Scooter Gennett is the surprise of the year. He batted .295 with 28 home runs and 96 RBIs???? Absurd production out of a guy who got cut by the Brewers a week before the season. Duvall had his usual home run/strike out season. Schebler did the same. Cozart was great, all year long. Suarez was also really really consistent, maybe the most comforting thing we saw was his improvement. Tucker Barnhart was rock solid behind the plate, and had nice production at the plate. Winker was a late callup, and looked like the top prospect he was. 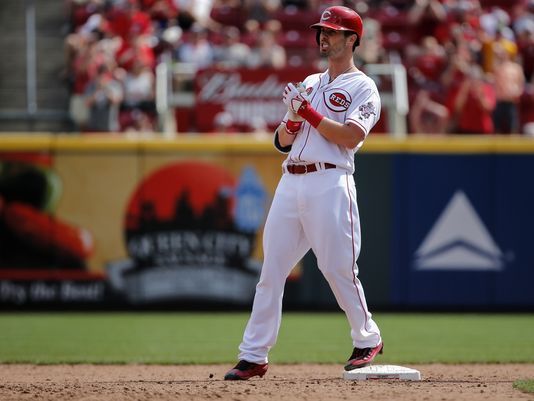 Jose Peraza was probably the biggest let down, but he wasn’t as bad as the doom and gloom Cincy fans made him out to be. Of course they expected Peraza to put up ridiculous numbers in his rookie years, and he underwhelmed don’t get me wrong, but if you are giving up on this kid you are a moron. People hate on him because he was traded for a guy that won a homerun derby, they chose not to see that Todd Frazier was probably the most overrated player in the league. Here is a little nugget for all you haters, Jose Peraza hit .259 this year with a .297 OBP. Billy Hamilton’s career BA is .248 with a .298 OBP. In Billy’s best year he hit .260. This was Billy’s 4th complete year as a pro, this was Peraza’s first. Peraza’s ROOKIE year mimics the same stats as Billy Hamilton’s BEST year. Now, I get it, Billy is fast, but he can’t steal first base, and the guy flat out can’t hit.

So what do they need to do to make the jump? If I’m Dick Williams, I’m not paying Zack Cozart. I just can’t grasp paying a 32 year old short stop who just came off a career year the amount of money he’ll be asking for. Thanks, for the time Zack, you were apart of some great teams. The next thing is, I’m putting Billy and Adam Duvall on the trade market. Billy Hamilton just hasn’t made improvement, I’ll lose the base stealing, cause again, he can’t steal first base. I’m shopping him to a team that could use some defensive help, and doesn’t need a leadoff hitter. Duvall is solid, I just believed that he peaked. He is what he is, he will hit 30 homeruns, 100 RBIs, I just think we have guys ready to replace him, there is a market for him, exploit it. The outfield is too crowded. I sign a quality bullpen arm. A reliable veteran in the back end would be a great add. Need a rock solid guy who has done it before

Now obviously this is a slight stretch, Peraza playing center is different, but he has done it and he has a bad infield glove, this could be a perfect move. People forget that Billy was a minor league shortstop, now is a gold glove CF. Senzel gets brought up, he is the number 1 prospect, a top 10 prospect in baseball. It’s time.

This is probably what the lineup will be:

I think the Reds are forced to get rid of at least one outfielder. Schebler is easier to deal. I dont think the Reds have the balls to trade Hamilton or Duvall. Billy has to be holding someones kids hostage because the guy can’t hit. The Reds won’t do it, but it’s time to go. The is trouble is this: who will actually play SS? Will be interesting to see where they go. Peraza, Dilson Herrera, Suarez, Gennett, Senzel are all there to play the spots. It will be a battle in the spring.

Long story short, the rebuild is moving. We have gotten beaten and battered for a few years now. I think this year was the final beat. I think next year the record begins to get near 80. We are not nearly as far off as people think. It takes time, but we have young solid talent. See you on opening day 2018.