Lance Stephenson and The Perils of Being The Master Troll 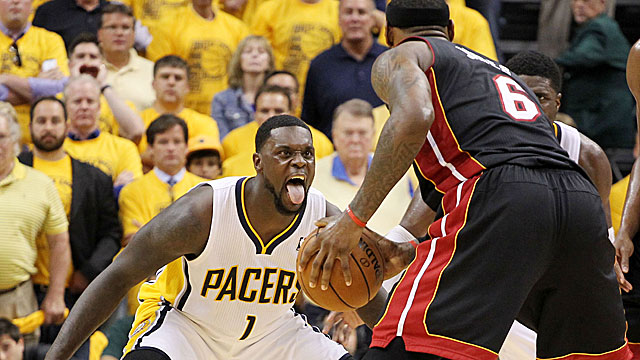 Trolls don’t win in the long run. Trolling is a delicate science, perhaps the most delicate science. In order to troll, you must first possess true skill. However, in the core of the troll’s heart, he knows he doesn’t have what it takes to win fair and square. He knows he has to add a completely unforeseen element into the mix. The master troll doesn’t just live in his head, he lives in your head too. He knows what you’re expecting him to do, and he consciously dangles it in your face like a carrot in front of a carriage horse.

Lance Stephenson is the NBA’s master troll. He possesses the skill to actually take a game over, but his skill can’t be sustained. Therefore, he brings a new aspect to the game. The element of surprise. Will be blow in your ear? Gallop like a horse into your chest? Put you in a headlock and wrestle you to the ground? Yes.

Lance pulled out all the stops last night, in fact, he pulled out too many stops. He got too hungry. He received a free pass to an all you can eat troll buffet and ate himself sick. He had LeBron in his crosshairs. He had the Cavs on the brink of being down 3-1. It was there for the taking.

Lance performed his magnum opus last night. He lost, but he truly gave it his all. LeBron is his drug and he simply can't get enough. Blog in bio.

But Korver stepped up, LeBron took over and the Pacers shot their wad too early. Indy is done. The Cavs will win this series 4-2.

Last night we saw what happens when the dog catches the car. We saw Lance finally get what he wanted, and he didn’t know what to do with it. LeBron is the king of basketball mental warfare, and he defeated Lance last night. He chose to let him empty his bag of tricks, and when that bag was empty, Lance had no idea what to do. And that’s why being a troll is so tricky. One moment you have an arena full of people eating out of the palm of your hand, the next you’re the lead clown at the circus.

You can try as hard as you’d like to change your circumstances, but sometimes the universe simply has other plans. The Lance Stephensons of the world don’t beat the LeBrons, they may win a few battles, but they will lose the war every time. And the thing is, the master trolls of the world know this. Lance knows he will never beat LeBron, but the prospect of it actually happening is enough to fuel his fire for life. And that’s why I’ll always love him.