If Lamar Jackson is There at 21, The Bengals Need to Draft Him

Why is it time? Well, the Bengals need a damn playmaker, a guy who can move the needle. A guy who is going to win back this fan base. A guy who can bring life to Cincinnati. Lamar Jackson can do just that. 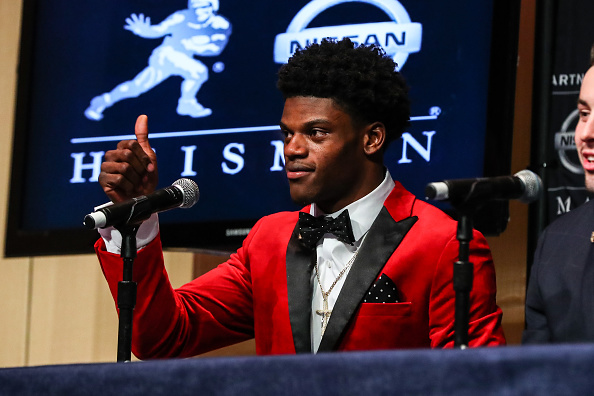 So let me put away most of your ridiculous doubts away about Lamar Jackson.

I had someone text me today saying he is too dumb to play quarterback in the NFL. There was a story that went around that while he was at Louisville they had to put plays into Madden to help him learn the playbook. I’m not sure how accurate that all is, but let’s play along and say it is all true. It still doesn’t affect me. Why? Lamar will sit his first year anyway. Andy will still take the reigns this year, give Lamar a full year to do nothing but soak in playbook. But Ty, wouldn’t that cause problems for this year? Actually no. Drafting Lamar would only motivate and increase Andy’s need to play well. After this season the Bengals could cut Andy and owe him nothing. If the Bengals take Lamar that means Andy will be basically playing in a contract year. He will be doing anything to get that big pay day. It truly is a win win win (CC: Michael Scott). Lamar gets the chance to sit back and learn. Andy gets to play in a contact year and earn his money. The Bengals get to benefit from both.

But Ty, he isnt accurate??!!! Below are 3 quarterbacks’ college stats. Josh Rosen. Sam Darnold. Lamar Jackson. All 3 threw about the same amount of balls. All 3 were playing in their 3rd year of college. All 3 had eerily similar numbers. The best completion percentage was Sam Darnold at about 63%. Then Rosen at just above 62%. Then Lamar 3rd at about 60%. So Lamar Jackson who apparently is sooooooooo inaccurate completed 2 percentage points worse than the two “safest” quarterbacks in this draft. But Ty, aren’t those numbers flawed a little bit? Yes, in fact they are. In favor of the other two. Maybe not as much as Sam Darnold, but definitely in favor of Rosen. Lamar played in more of a pro style offense. It wasn’t the college spread. He didn’t have the gimme screen passes, or the dump offs to the running back.  At least not nearly as often as the others. Lamar got his ass under center, dropped back and made real passes. Nothing there to pad the stats.

I keep hearing these lazy comparisons. He’s the next RG3, Akili Smith, etc. He is none of those guys. RG3 played in a joke of a defensive conference where he ran the spread and threw bombs down the field. He got to the NFL. Didn’t know how to get under center, didn’t even know how to slide. Remember that? Robert Griffin had to be taught how to slide. Lamar knows how to avoid contact, get out of bounds, save his body. He doesn’t take on linebackers head to head. GTFO with that comparison.

Lamar Jackson played in a conference that shits out defensive talent. Florida State, Clemson, North Carolina, NC State. That’s right. Real NFL talent. Guys who got taken in the first round, and Lamar put up nothing but NUMBERS. He roasted Florida State. He lit up Clemson at Clemson. All while learning a pro-er style offense. All while not having a top running game, receivers, line. He learned from an NFL coach, A guy who has been all around the NFL, and is a respected football mind. And again put up NUMBERS. Not only that, he put up numbers his Heisman year, that’s all well and good. He took people by surprise right? Nah, he came back the next year, with a target on his back, and threw for more yards and ran for more yards. 3600 passing yards topped off with 1600 rushing yards? Are you serious? Those are Madden 04 Michael Vick numbers. All while having a target on his back. Lamar is a playmaker. Nothing other than that. He will do that in the NFL.

So to recap… if Lamar is there at 21. You take him. No questions asked. You let him sit for a year, learn the offense, get familiar with NFL. You let Dalton try to earn his money for his upcoming free agency. You then hand the keys to the Ferrari over to the best playmaker this league has seen since Michael Vick, and you let that guy drive.

What if Lamar isn’t there? Well poop. If McGlinchey is somehow still there take him and sure up the tackle spot completely. If he isn’t there, go with the top center on their board. I’m not going to sit here and pretend I know the ins and outs of which center the Bengals should take, I don’t know the difference between Ragnow, Price, Daniels, whoever else. Just take the best one they have on their board. Lastly, dont be stunned if the Bengals go corner. I won’t be a fan considering it would be the 4th first round corner taken this decade, but the Bengals have shown how much they value that position. If they think they can get a good center in round 2, they will go with the best corner on the board.